Because I’m an old fogey, I love to read magazines and newspapers.  I subscribe to too many magazines, but all of my very favorites are no longer publishing.

My number 1 favorite magazine of all time was Star Hits (USA)/Smash Hits (UK).  This was the 1980s New Wave handbook.  Every month, my friends and I would rush to the Safeway to get the latest issue, and then we would cut it into tiny little pieces and paste our favorite pictures everywhere.  If I could have eaten it and absorbed its wisdom, I would have. 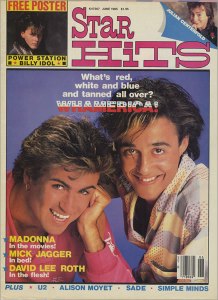 If you didn’t grow up in the 80’s, you just wouldn’t understand. It was our glossy bible, it was our universe, our world revolved around Star Hits. If Star Hits said it was cool, then it was cool.  This magazine made one of their own a pop star – Neil Tennant of the Pet Shop Boys started out as a writer for Star Hits!  We papered our lockers and our bedrooms with pictures from Star Hits.  We based our hair, our makeup, our clothes around Star Hits.  I bought records based on which band had good hair in Star Hits. (Or which band gave a good quote.)  If Chris Heath, David Keeps, or Suzan Colon said it was good, then by God, it WAS good!  And I was going to buy it! 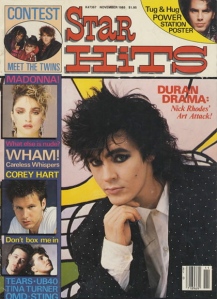 I used this picture of Nick Rhodes as a how-to guide for applying eyeliner.

No, back in those days, you couldn’t download your music illegally.  (THE WORLD WIDE WEB DIDN’T EVEN EXIST YET!)   You either taped it off the Kasey Casem countdown, or bought it. Star Hits didn’t put music in their magazine that Kasey would play. HELL NO. It was only obscure British bands.  You had to buy it at your local independent record shop. You had to special order it, or look in the import section. You had to GET A JOB so you could afford to buy the songs you wanted, or watch MTV all day to catch a clip of your new favorite band. (Well, besides Duran Duran, who were featured in every single issue without fail, and who were always the #1 favorite band.)

I got a few letters printed in Star Hits, and it was like getting your name engraved in the gates of heaven. Saint Peter, aka the Bold Type, validated your existence. This was the equivalent of having a million hits on your website nowadays.

I think the reason that Star Hits was so special is that it went beyond the usual teen magazine bullcrap like “What is your favorite color?”  The articles were written at an adult level and dealt with meaningful topics.  There I was, a little Catholic school girl, reading an interview with Curt Smith of Tears for Fears about atheism, and here I am now, an atheist.  When I read that article, it made me start questioning things, and researching religions around the world.  Years later, I came to my own personal revelation about my beliefs, or lack thereof.  All thanks to a “teen” magazine?  I don’t think so.  You wouldn’t read something like that in Tiger Beat, let me tell you.

The saddest thing is that there is not a single website devoted to Star Hits. Do *I* have to make it? I have no talent in that department. So we will just have to pretend this post will suffice.

The closest thing I found to a Star Hits fansite is this blog post which contains a PDF of the February 1984 issue.  This was the premiere American issue, so it’s pretty fun to go back and read now.

As I got older, I wanted to become more sophisticated, so I suppose it was only natural that my next guide to life was in the form of Spy magazine.  (Now I subscribe to New York magazine, but it’s not quite the same…)  I learned about New York night life, Donald Trump (short-fingered vulgarian), Al Sharpton, and Anthony Haden-Guest (related to Christopher Guest, natch). Mr. Haden-Guest was a tireless party animal and every move was chronicled in the most hilarious manner possible.

There were so many brilliant bits in Spy magazine…Separated at Birth, Logrolling in Our Time (in which authors were outed for writing complimentary blurbs for each other), The Liz Smith Tote Board (which listed a count of who was namedropped and how many times that week), Letters to the Editor of the New York Times (since at that time no letters were printed in that publication), and Review of Reviewers (which highlighted the most egregious errors in critic’s reviews).

The writing in Spy was so witty and clever, it gave me a whole new perspective on humor. I would read every inch of that magazine, and believe me, it was thick. The type was very small and they had tiny little blurbs in the margins of almost every page.

For years, I have lamented the fact that I didn’t keep my back issues on hand. I get the urge now and then to revisit old friends. Imagine my excitement today when I found out that Spy magazine has now been scanned into Google Books! Every single issue is now available instantly at any time, any place. Is it any wonder that I LOVE THE INTERNET?

I was browsing through some old issues online and I found one from December 1986 that has an interesting profile of Oprah before she was OPRAH. Take a look for yourself and see how prescient this article is. Oprah declares she will become a mogul, and damn if she didn’t. You can also see the beginnings of her diva behavior.

The biggest question I have now is, when will Google scan in every issue of Star Hits magazine? I am not even kidding. I can’t be the only person who wants this.